FrSky has recently released its new taranis TX into the wild. Essentially this TX is made from a plastic case that virtually the same as the JR 9x2. The software is OpenTX which has been around for a while on some modified hobby king hardware. The greater processing power of the taranis has allowed the OpenTX developers to increase the software functionality. OpenTX is an open source project. 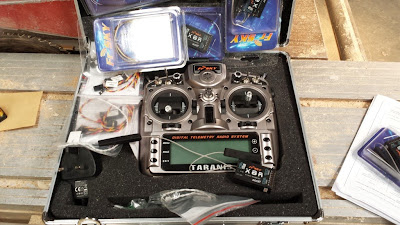 The first obvious characteristic of the transmitter is the price, which is about £140-00, including charger, metal case, neck strap and so on. An 8 channel receiver is under 25 pounds and high sensitivity vario is about 18 pounds. Clearly low prices are not synonymous with f3b due to the programming complexity that many pilots employ and the top end transmitters they use. E.g the graupner and jeti range.

Where the Taranis might be of interest to f3b pilots is its software features. People familiar with the multipex profi 4000 will quickly get to grips with the Taranis. It employs the same principle of mixing with each servo having a number of inputs of its own. Switch assignments etc. are user choice. Unlike the 4000, the transmitter is fully integrated with modern telemetry sensors and using the vario you can flick a switch that will tell you your height (it can function as a normal vario, of course). This is a very useful feature for launch practice, obviously. Especially as you can also log the data on SD card. Compared the 4000 the Taranis also has more powerful functions in terms of logical switches and custom functions. For example, you can make the TX respond to telemetry data - You could make it switch off the motor at set height, using data from vario. The Taranis has a built in speak and headphone socket which can be used for timers, telemetry data, voice outputs and so on.

It seems clear the OpenTX software will develop much faster than proprietary systems due to the nature of open source projects. You can actually log feature requests with the development team, which have a good chance of being implemented if they are beneficial.

With regards to the actual TX box, the ergonomics are not that great, with the switches being rather hard to operate. However, there is the prospect of an improved TX from Frsky called the Horus, which doesn't have a realease date yet.

I have programmed one of my f3b models on the Taranis and am waiting for a trimming session before I can use it an actual competition. I will post more on the Taranis in due course. Maybe with some logs of my super low launches. Not that we need a graph to see how rubbish they are!