The bank holiday weekend of the 24th, 25th and 26th of August was the weekend the BMFA nationals were held at Barkston Heath. The silent flight nationals were held a few miles away at RAF Cranwell, due space restrictions at Barkston. Unfortunately the weather was not as good as it has been this summer and I arrived to a sea of umbrellas. 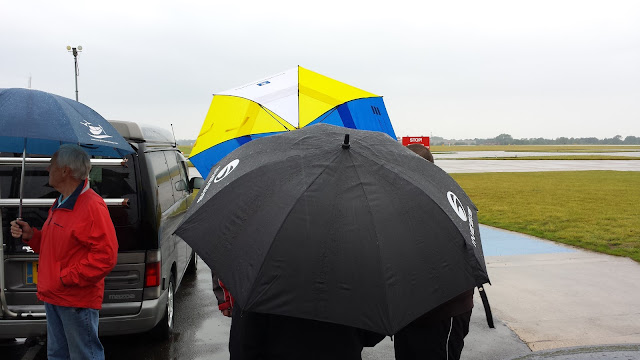 The decision was that we would drive over to Barkston heath to sample the delights of the trade stalls (okay food stalls) and make a weather call at 12:30pm. As it turned out the weather actually cleared up around 10am, but at 9am it had been incredibly wet and the chances of flying an hour later looked extremely remote. By 12:30 there had been no rain for a while we headed back to Cranwell and setup the course. Unfortunately only one round of duration was completed before the rain returned. I would advise against leaving your car door and window open if there is a strong chance of rain.

Despite some parts of the day being as wet as the proverbial otter's pocket, it was a fun day out with the F3b guys and we will fly the nationals on the reserve date.