As the scheduled day for the nationals was washed out earlier in the year, Sunday (06/10/13) was used as reserve date to re-fly the contest. The weather was nearly as good as at the last contest, with temperatures easily in to the low 20s I would guess. Definitely not bad for an English October. We will have to find something else to moan about at this rate!

First off I will have to apologize for forgetting to take any pictures for this report. I will have to sack myself from my self appointed role as UK F3B reporter if I'm not careful! The contest didn't start on a good note with Mike Holtby's model (cobra) suffering a battery failure before the contest even began. We decided it was better to redo the contest matrix as Mike didn't have a backup model. Thanks to the jedi like computer skills of yours truly this didn't cause much of a delay and the contest started in good time.

Duration flying throughout the day was enjoyable and challenging at times. Despite what some people would have you believe there isn't much slope lift at the Wetlands site to get you out of trouble if the slot air turns bad. Looking at the score sheets only 8 out of 18 attempts by all pilots were "flown out". These weren't just scores by pilots lower down the rankings - the eventual winner of the contest scored a 6:44/100 in the final duration slot, although this did score 1000 points. Indeed only one person got to 8 minutes in the final two slots, which showed that the conditions became tricky towards the end of the day. For me the highlight of duration was Bob Dickenson's excellent read of a downwind thermal which he chased bravely and rode to a good height. He was followed to the thermal by Simon Haley, who in the end was the only pilot to fly out 10 minutes in both his rounds, and he scored a perfect 10:00/100 in round one.

Duration conditions were also fairly tricky with the best score being 21 laps by Steve Haley in both his rounds. I had a good contest with Steve scoring 20 to his 21 after a timely re-launch that saved me from a probable drubbing after a poor launch in to moderate air. Things didn't improve for me though as in my second distance slot my model's wing joiner snapped at the bottom of the zoom while on a mission to challenge the high scoring Simon. Amazingly the wings and tails of my model were virtually undamaged! I guess it was down to a few tough landings in the past. Mike Challinor suffered a bad landing and decided not continue flying after minor damage to his model.

Conditions for launching were not great in the first round of speed, which is reflected in the scores. The fastest time was Dave Worrall with 19.34. It was a bit tricky for me as I only had my old tragi available as a backup model and I didn't have a model memory for f3b programmed in to my transmitter for it. However, I had flown the tragi in f3b previously so I had some idea about a setup and managed to quickly add some launch settings with the aid of my deflection meter which is a very handy device if you are on the field and need to make adjustments to your model.

All round 1 times other than Dave's 19.34 were over 20 seconds, although this is partly due to a rare cut from speed king Steve, who ran in to trouble at base A. Times in the second round of speed were better, with most people getting under 20 seconds. Dave Worrall and Simon Haley both made very good times, but Steve was back in the groove with a 15.87 to win the 1000 points and lower the scores of his competitors.

Winner of the nationals was Steve Haley, who's 15.87 proved to be decisive over Simon in second place. Simon came close to beating his old man and flew very well again, scoring maximum points in all his duration and distance slots. Third place was Dave Worrall who again showed his considerable f3b knowledge and did well in all three tasks. 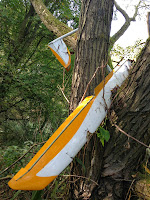 Aside from the contest Mike Challinor brought a camera equipped hobbyking bixler to look for Bob's model, which had been lost in the trees at the previous contest. Hopes were not high for a recovery after the search and rescue model itself was lost in the trees! I don't know if a St. Bernard was sent in but the camera model was retrieved and Bob's model was eventually located. Amazingly a model of Clive's that was lost a couple of years ago was found nearby. Bob's Estrella is still M.I.A, but I'm sure it will be found. I believe Bob and Clive are to be provided with printed maps outlining the location of the trees and other obstacles, for future reference. What future archaeologists will make of the Wetlands site remains open debate.....
Posted by Unknown at 10/08/2013 11:11:00 am