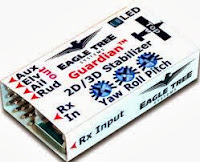 Gyros are starting to cause controversy in F3X circles. It seems some people think they are allowed in competition, but I think if you read the rules, they are not allowed.

e.g. from the FAI F3 rules: 1.3.3. Category F3 - Radio Controlled Flight This is a flight during which the model aircraft is manoeuvred by control surface(s) in attitude, direction and altitude by the flier on the ground using radio control

To my mind if a gyro moves a control surface it is against this rule. Planet soaring is worth reading, however I am still worried that previous CIAM discussions seem to allow gyros in spite of fairly clear cut rules.

I would highly recommend reading this article from Roman Vojtěch's excellent site - here Roman spends a day flying an f3b model with a gyro.

Someone has pointed out that 1.3.3 is a description rather than a definition. However:

According to paragraph (F3B Rules) 5.3.1.1: Definition of a Radio Controlled Glider: Model aircraft which is not provided with a propulsion device and in which lift is generated by aerodynamic forces acting on surfaces remaining fixed in flight, except control surfaces. Model aircraft with variable geometry or area must comply with the specification when the surfaces are in maximum and minimum extended mode. The model aircraft must be controlled by the competitor on the ground using radio control. Any variation of geometry or area must be actuated at distance by radio control.

This would appear to cover gyros as well (definitely being a definition), but from a recent CIAM meeting, it seems they are in favour of gyros. Apparently a more technical, more expensive system will encourace more entrants! I think we need to get this situation clarified properly. It seems a rule change is not on the cards due to an CIAM rule freeze. It feels a bit like FIFA at the moment.