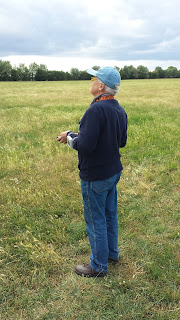 With sadness, I must report the death of Dave Worrall. The seriousness of Dave's condition had cast something of a pall over the weekend's contest, and yesterday we received the inevitable news that he had passed away. Only last month we had had the pleasure of his company and he had still been flying to his usual high standard. Dave will be sorely missed by us all.

Announcement from Clive as follows:
To Everyone. It is with deep regret I have to announce the death of Dave Worrall. Dave has been fighting a blood disease for several years but managed restart flying F3B when it became possible to use electric motors for launching. Dave was at the top of tree for many years with his own designed "plus" models for slope and thermal soaring and took part in several F3B World Championships the last being in Switzerland 2007. Taking the Bronze medal in 1983 England, Silver Medal 1985 Australia, narrowly missing the gold, was part of the team Gold in Australia that year and silver team in 1983 plus the same in 1987. He took part and won many contest both slope and thermal, taking part in the very first Radioglide at Pontefract Racecourse. As a qualified engineer working in the aerospace industry for most of his life, spending several years in Germany, he always took a measured technical approach to producing and flying model aircraft and will be sorely missed by his many friends.