Report on League 2, by Clive Needham: 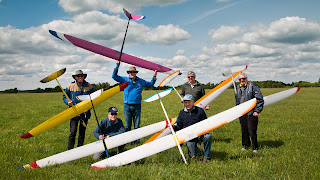 Due to various circumstances including broken models, sickness and lack of support from some, only 7pre- entries were received by the Wednesday deadline for this contest plus maybe the uncertainty about which day of the weekend the comp was to be held. The reasons for using this system have been previously explained, for an example two weeks earlier there was an e-soaring contest and if the contest had been held on the Saturday (the preferred day) the weather would have intervened plus 5 out of the 13 competitors would not have been able to attend so it was fortunate in that case Sunday was the best day.

Of the 7 entries only 2 competitors we going to use winches, then one of those decided the day before not to attend, leaving only Bob Dickenson winching, however as Bob also has an e-Crossfire model he agreed to fly it. So that how the first all e-electric F3B contest came about with 6 competitors, but if Bill Haley had not had an operation on the Friday and John Penton with severe back pain there would have been 8 flying electric models.

I know some of those who prefer to continue to fly “real” F3B contests are not too happy about allowing electric launching in the League and how the height limits are set, however, it is up to those who want to use traditional launching to attend and encourage others to do so.

It is, and never has been my intention to discourage or exclude anyone from flying in the League but it is about numbers and the minimum required. I would point out that without those flying electric models nether of the 2 contests so far this season would have taken place. I am certainly no longer able to do the work required to winch launch, as is the case with Dave Worrall, plus note the Haley’s and Brian Johnson would not be attending if winching is mandatory, hopefully John Penton will be flying electric again if his back improves, as he was prepared to invest in a brand new electric Ascot model.

As forecast the day was more or less ideal, see picture already sent, with a moderate wind, blue skies and clouds passing through. Variable lift as is shown in the scores. The height limiters were set at 270m which was in line with what could have been expected from a winch launch.

Duration R1-Slot1. Dave Worrall (Crossfire/Cobra hybrid) just piped Steve Haley (e-Fosa) by 30 points but neither managed the full 10 minutes.
Slot 2 A similar pattern followed with Clive Needham ( Ascot) just beating Simon Haley (e-Fosa) by 5 points.
Distance R1 slots won by Dave Worrall, Bob Dickenson and Clive Needham the highest number of legs by Dave Worrall 21. Distance R 2 slots won by Steve Haley, Simon Haley and Dave Worrall highest number of legs Steve Haley 22. Clive Needham was unsighted and landed Ascot with flaps down and broke a servo arm so had to change model to Dingo for remainder of the contest.
Speed R1 Won by Steve Haley 14.74 seconds the fastest time so far with an electric model. None of the others posted less than 20 seconds.
Speed R2 won again by Steve Haley 17.36 but only just beating Simon Haley 17.73 only 23 points down. Clive Needham had a problem with the Dingo gear box so on 2nd run so the model only reached 200m with the prop was freewheeling throughout the flight. so could not fly in last Duration.
R2 Duration Slot 1 Better air so slot flown out. Won by Steve Haley, Dave Worrall 999 points and amazingly Brian Johnson 3rd flying the 2.6m Axel –xxl- 9m-57secs and with 85 landing points scored 979.
Slot 2 Brian Johnson flew as a makeweight for Clive Needham won the slot with 9m -58secs and 100 landing, pushing down Bob Dickenson and Simon Haley. On checking the scores I found a mistake so Steve Haley was down to 5827 and Dave Worrall up to 5406 which did not affect any of the places.

Note the following, for those interested in possibly using electric motor launching, is a little bit of history on the progress I have made using this system over the last few years. Over three years ago due to my decreasing mobility and experience of flying in the e-soaring league I started looking into the use of an electric motor to launch F3B models instead of a winch. I was able to buy a nearly completed modified Crossfire model with the nose cut off to accommodate the fitting of a Kira 480 Kontronic motor and gearbox, to be powered by a 2600Mah 3 cell lipo. After much head scratching I managed to get everything in and flew the model, first of all at e-soaring contests. The model launched well even though the power output was only 550watts, enough under normal conditions without ballast, but at the 2012 BMFA Nationals at RAF Cottesmore on the day of F3B contest it was very windy so with ballast of1.2Kgs it was unable, in the program I had dialed in, to reach the 300m height being reached by the top models via winch launching, even though adding an extra 10 seconds longer than the normal motor run of 30 seconds. I later managed to fit in a 4 cell lipo increasing the power to about 650watts and tried it in an e-soaring contest, but unfortunately lost the model, due to what I think was battery failure, I was using a separate one to power the receiver, a system which I have not used since.

I had previously bought a 2nd hand Skorpion model ready to go for winch launching, because it came with an unfitted out additional manufactures e-fuselage. On advice I bought a 2w -25 Het motor, a friend made an adapter plate to marry up with a Kontronic gearbox, unfortunately the person who advised me to use the Het motor did not tell me that to get the 1100 watt power I wanted at the motors maximum 70 amps required a 6 cell lipo!!!

To leave the forward fuselage empty the e-version is supplied with a sub frame which fits inside the model (similar to the Rotmilan) behind the wing allowing the v tail servos to use short push rods and keeps the receiver well away from the electrics. With the help of Tony Fu at Sloperacer the electrics were fitted out and a battery pack of 5 cells fitted providing just under1000 watts. This model climbed well even when ballasted by means of tubes fitted into the wing roots by Tony Fu.

At this time, I had also been flying a V W Dingo model using a winch, however in the meantime Tony Fu (see Sloperacer.com) had developed a power system using an elongated Leopard 28 mm inrunner motor matched with a Reisenhaur 5:1 gearbox which is capable of producing up to1500 watts on a 4 cell lipo. Tony agreed to fit one of these motors by cutting off the Dingo nose and moving the elevator servos into the V tails with only a small bulge in a cover to fair them in. the result was only a 200 gm increase in the overall weight of the model to 2450 gm. Over this period the other pilots in the BMFA F3B League indulged me by allowing me to compete with them, as due to models I was flying and my declining ability I was not perceived as a threat, plus due to the development of height limiters in the e-soaring and F5J disciplines the height setting agreed was not fixed to the height the better pilots reached from a winch launch.

However as more people began to see the advantages of not having to carry about winches and heavy batteries plus the hassle of retrieving lines and rejoining broken ones, it became necessary to write extra rules to accommodate launching by electric motors, to enable as far as possible to equalize the launch heights, although this is not completely achievable as every winch launch is different depending on the model, its settings, the conditions and the pilot’s ability. The advantage using a motor is of course consistent launch heights, which depending on your point of view is a good or bad thing, one thing for sure is that everyone using a motor starts level, so the difference in the scores is based only on the pilots flying skill.

More and more are finding it more convenient to launch using electric motors for the above reasons resulting in the above described contest but it must be stressed that there is absolutely NO intention of excluding anyone flying in the BMFA F3B League using any mode of launching. But of course it must be emphasized that anyone wishing to attend FAI international contests must use winch launching until, if and when, on board motors are allowed.