The UK weather has not been kind to F3B this year. We lost the pre-season speed contest and round 1 to rain. Round 2 was scheduled for the 11th of May, but also had to be cancelled due to the wet stuff - this is extremely rare in the UK ;-) ! As such, under the new rules, it was decided to re-schedule round 2 for the following weekend. As it turned out the weather was about as warm as it has been this year.

However, the air was quite tricky because of the strong wind. Steve told me that the conditions in the previous day's Esoaring contest had been quite difficult despite the heat, and this was carried through to the Sunday. Throughout the day, lift cycled very quickly and didn't seem to feed down wind in the manner normally expected. Launch timing was quite important on the day - if you were unlucky you could launch in to bad air after your competitors had been flying in a thermal.

Round 1, slot 1 of duration was flown out by Bob, Steve and Clive, with Steve just taking the 1000. Young Simon didn't quite find the lift and was down quicker than expected. The tricky air would catch most people out by the end of the contest.

Slot two was quite tricky - the longest flight was 7:41 by John Whittle. I (Tom Satinet) had not had any launches since the end of last season and my log shows my launch was 180m! This low launch height meant I got a flight under 5 minutes having had to relaunch due to a pop off.

Round 1 of distance was interesting and thermals and changeable air came in to play. Simon Haley started well scoring a 1000 in his slot, but damaged his tailplane shortly afterwards and was not able to continue flying. I flew a tight contest against Steve scoring 21 laps to his 22. John Whittle also scored the 1000, to stay level with Steve on points

Round 2 of distance continued in similar fashion with Steve looking to be on for about 30 laps before the lift shut down, and in the end Bob pushed him quite close on laps by flying in a different part of the sky. I managed 25 laps against John's 16, which would prove to be important in the final score. I had done about 8 laps before John entered the course, at which time the air was not as good. Bill and Clive had an all electric encounter, with Clive just coming out on top.

Round 1 of speed was fairly close with Steve scoring a 16.12, which was the best time of the day, against my 17.00 and John's 17.7. Round 2 followed a similar pattern with Steve scoring a mid 16 and myself and John not too far behind. Clive put in a smooth run for a 21.xx with his electric model.

The final duration round was quite eventful with Steve flying against John. At this point Steve was ahead in the standings, but tried to follow a feed downwind that didn't come to anything and lost 5 minutes to John who stayed up wind. At about 7 minutes I thought John was going to have to land but he managed to hold on until another thermal came through. It was very smooth and calm flying.

I was in the final slot against Bill and Bob. It was a fairly another interesting slot, with Bill and I both flying out 10 minutes. I took the 1000 points on the landing tape. Bob didn't managed to get in to the lift early and struggled like Simon and I had previously.

Ultimately Steve, John and myself all dropped quite big points in a slot, but Steve's better speed scores meant that he came out on top, followed by John in second and myself in third. Steve was speed king and distance doctor scoring 1000s in his slots. John was duration guru with 2 perfect 1000s and longest combined flight times and most landing points. The most laps in distance was 25 by myself, in round 2.

I didn't have chance to take any pictures on the day, but here is a log of my slot where I flew 25 laps taken from my Taranis. It is a plot of height and elevator movement, which is quite interesting. 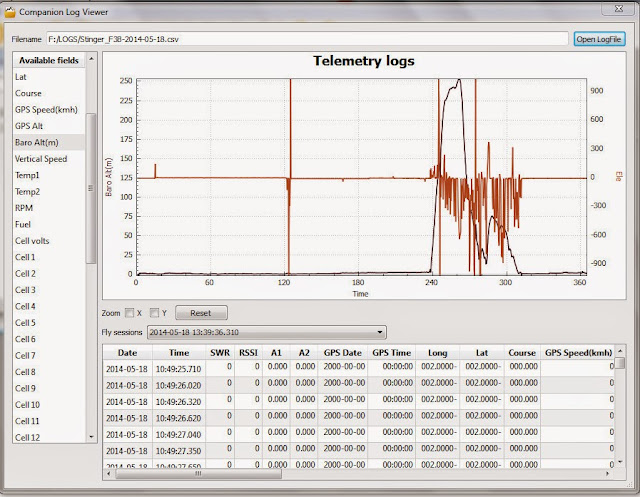