I had not planned to do any European competition this year but as a result of a last minute decision by Steve Haley to go to Belgium, I was suddenly thrown into the exciting, if not daunting prospect, of having to fly against some Europeans. Steve wanted to make up the number for the team so along with: Clive Needham, Bill Haley, Stephen Haley, Ken Woodhouse and myself - we planned the trip.
The thought of flying a European (ex Euro tour)competition had cause an initial rush of excitement as I knew from previous experience flying on the continent was a totally different experience; from the standard of flying to the smooth organisation European competitions are fast paced and pilot focused. However, Sat waiting at Hull Ferry terminal at six o'clock, with the last check in for the ferry at seven thirty, Mr Needham was still stuck outside Oldham on the M62, things were looking a bit desperate. It was raining and Steve and I working working out how we can get: three people, camping gear and equipment into one of our smaller cars and failing. With minutes to spare, Clive, wheel smoking and breaks screeching, arrived at the terminal to save the day and we piled all kit into the one mighty Kia (including its two fully operational windows and a lump of wood just in case).
The beauty of travelling by ferry from Hull was that now we could: kick back, get some dinner and crack open a beer before hitting the bunks in the cabin.
Arriving in Rotterdam early Friday morning it was just a straight two hour run to the site of the competition in Belgium Anthisnes. I had been warned previously that the site was tight to fly from, but as the mighty (and very comfortable) Kia bumped up the dirt track to the small plateau of a field. I was already prepared for the tree line a hundred meters downwind from the launch point and the surrounding crop fields. I did not turn in disbelief to ask 'is this it?" thanks to my earlier preparation on Google earth.
Ken had already arrived, coming from south of London via the Channel Tunnel. In fact Ken was so early none of the organisers had even turned up. This led to some confusion and the Brits were already upsetting the locals by pitching their tents in the wrong place. Ken wisely gave up on setting up camp and opted to start on his Calais supermarket purchases, by opening a can of beer whilst wait for the rest of the Brits to arrive.

The wind, that had been slowly building all day, was now at the point where it was a good enough excuse to not fly since the excitement I had felt earlier was now turning to nerves. Unfortunately for Bill, he had to fly his model (Shooter), as it had been recently mended after an unfortunate incident at a previous competition. A few test flights was all that was needed to get Bill's model's elevator and hook settings dialled ready for the following day.
Woke up to a damp windy morning but following the pilot's briefing the competition was soon underway. Round 1 slot 2 Ken is the first up for team GB in duration. Due to the high cross wind and the location of our winches on the downwind side this proved to be very testing conditions with many crossed and broken lines. Unfortunately for Ken and down to no fault of his own his model (Cyril) entangled with another competitors towline during launch resulting in one half of this tail plane being broken off. He was lucky to direct his model to a soft crash landing in a sweet corn field. Due to the contact with another winch line Ken was able to claim a re-fly schedule for later in the round. Slots continued with many crossed line and other pilots experiencing similar problems; this was becoming a day of survival. As the strong cross wind continued, the Contest Director (CD) following the Brits request, decided that each pilot would launch in the order that they were lined up on the winch line downwind side first. This helped to eliminate the problem of crossed lines. Maximum duration points were achieved by someone in every slot. However the conditions were challenging and changeable and the turbulent air, coming off the high corn fields, made achieving the hundred landing points difficult. Ken made the decision not to continue flying after a poor result in his duration re-flight. He did not want to risk damaging his number two model and spoil his weekend and the rest of the competition season. Instead he did a cracking job of helping the team by: ensuring all winch batteries were fully charged, launching models for Steve and I and being the best distance lights man in the business. Thank you Ken; who also managed to find the time to drink his annual supply of cheap beer over two days and digest a large cow strapped between two bread vans for supper!! 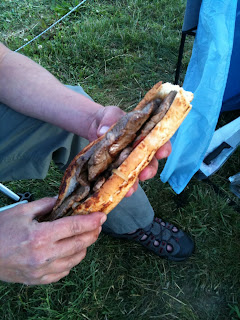 The second round of duration was flown early Sunday morning, the wind had dropped to almost nothing and conditions were challenging for different reasons. A good launch was required followed by delicate flying with minimum control input. This would maximise efficiency and hopefully achieve a thousand points. I was impressed in the way that Steve's Fosa performed in these weak conditions by being top of the pack throughout his slot.

Next up distance. Due to the conditions there was only one practical side to fly distance. So this made chatting a little easier for team GB against the might of the bigger European teams. We produced some good lap scores, and caused some upsets when Steve took a lap from Andreas Bohlen (Switzerland) and myself a lap from Peter Hubbertz (Germany). Our strategy worked well (but that's our secret!). Clive did well against a strong field achieving nineteen laps in his first slot. Bill flew some great distance and was unlucky not to get the 1000 in his second slot by missing his last lap by less than a second. Most slots were won with scores in the low 20’s with the exception of Andreas Herrig (Germany) achieving twenty-six laps in both his slots!

Speed, as always, is the fun bit. Again, Team GB performed well with quick turn rounds on re-launches and good chatting to support the pilots. Clive and Bill as always impressed me with their dedication and determination to score points in every flight and finish the event in full.
I started with a disappointing 17.45 in average air and I knew that I would need some luck and to fly well if I was to have a chance of my goal - a top 10 position. However with the pressure building it all went wrong in my second speed run when I crossed the safety line and gained 300 penalty points. The run had only been 18.73. So for the third and final run I had nothing to lose. Stood on the base, Steve asks “I guess you want to go for it?" I did not reply and just waved Ken to Launch. Ken gave me a cracking, full ballasted launch with plenty of tension into reasonable air. However the climb out was a bit awkward due to a recent wind shift which resulted in an abnormal entry onto the course. Diving onto the course I rolled and pulled like I had nothing to lose; clipping the turns perfectly and before I knew it I was on my last leg with the model maintaining good speed. A quick twitch on the elevator to prevent disaster, followed by some over correction and it was done - a 15.14 run which was a new PB. Boom!!!!

Steve, partnered by his dad Bill were, as always, a force to be reckoned with. Steve did very well with average air recording times of 15.72 and 16.87 for his first two runs which put him in 9th place. With everything to play for going into the last round, a good run could put him on the podium. Problems with the chute opening on the first launch saw him with the breaks out and quickly coming in for a re-launch. On the second attempt the launch crew double checked the chute and Steve was away. The launch was average and so was the air. He dropped onto the course and clipped the first turn perfectly and was on his way back to base A. Another good turn and all the competition were watching. He positioned the model low but perfectly between the corn field and base B, rolled and pulled hard...nothing...he’d cut. Quickly recovering, almost ploughing into the corn field (with an 'oooh' from the onlookers), he returned to base B to get the turn but it was never going to be fast enough. A 21.94 sec run with a cut.


Conclusions
The final results were disappointing but promising and I will let you do the maths on what could have been for Steve and I if we had not made mistakes in speed. We all had a really enjoyable weekend, Belgium may not be the biggest flying field but the organisation is excellent. The competition is 'hosted' by the local club, which means that there is no manning of course or button pushing and the pilot can just concentrate on, well flying; this result in a fast and more exciting pace of competition. Add to this the social aspect and the large entry numbers compared to domestic competitions and it makes the journey well worth the while.

The cost for the whole weekend including: ferry, entry fees, car parking at Hull, camping, food and spends came to just under £300 - I was pleasantly surprised. And although the journey was long, it was enjoyable because the travelling time in the car was less than in many domestic competitions.

Will I be going again? Yes and I would recommend it to anyone. The flying standard is high but this comp has a different feel to others I have attended, it is more about enjoyment. The winners are the people smiling, so we all won this one. Well done Team GB. 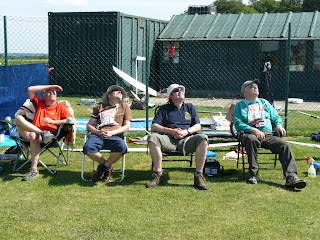 Most of the team but clive is behind the camera. 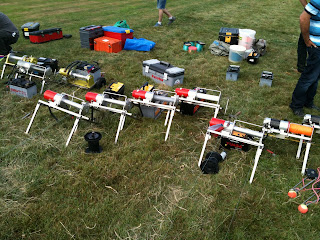