Two teams of three set out to attend the F3B Eurotour event in Belgium near Liege held over the first weekend in September.

One group (Northern Group) comprising Steve & Bill Haley plus myself Clive Needham travelled by the Hull Rotterdam overnight ferry; which is more expensive than travelling from the South however you get a night’s sleep both ways and arrive reasonably fresh. The food in the dinner and breakfast buffets was excellent and although the cabin was sparse, it was OK for one night.

John Philips came along to see what is involved in attending an International F3B event and to dog the lines for the 5 competitors; from the outset it must be said John did an excellent job throughout and got a line burn for his efforts. 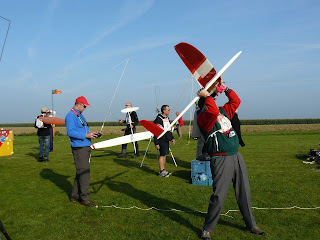 Both groups arrived early Friday afternoon and were able to get in plenty of practice flights, unfortunately whilst Mark was practicing distance on the course another pilot decided to practice speed and without warning slammed into his model and virtually destroyed it.

Not a good start, Mark therefore had to compete using his Freestyler for the rest of the weekend.

Knowing the site from last year and the forecast wind direction I was concerned that we might be launching downwind all weekend, however I was relieved to find the organisers had moved the control tent to the other end of the field, thus launching was more or less into wind throughout.

The field is very narrow and there was a small area about 6M by 20M behind Base A used for landing after Speed and for 1 spot in Duration, there were 2 further spots between Base A and Base B also for landing in Duration ( this area could not be used for landing in Distance) The remaining 5 landing spots were in slightly lower ground about 10m wide on the far side of the winch lines next to a field of corn about 2.5m high, this meant at times having to approach landing over the heads of other pilots. Several landed in the corn, as I did last year but managed to avoid it this time.

The safety area behind the winch line extended to a line of trees and a stubble field. On the other side of Base A where speed had to be flown there was another stubble field full of quite large stones. The safety line for speed was in that field. Needless to say I flew Speed from the winch side of Base A about 20m from the safety line therefore accurate flying in speed and all landings in the small area behind Base A needed care, resulting in many 300 point penalties. 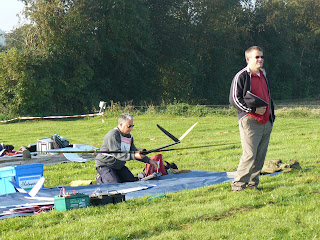 All of us except Steve had penalty points some even had two. Fortunately I only incurred one when I landed on the winch lines at the end of a distance task, I should have landed in the corn for which there was no penalty.

The Northern group stayed in the same hotel as last year about 10 minutes from the field, the hotel is excellent, although a little expensive, the owner even got up early to serve continental break for us at 6-30am.

The Southern group stayed in an area set aside for free camping on the flying field.

Friday night we had a barbeque on site which helped to kept costs down and on Saturday evening there was a meal included in the entry fee, this was held in the large permanent club marquee, and lunches could also be bought there on both days for 5 Euros.

We arrived from the hotel bright and early on Saturday morning just after 7-00am ready for the 8-00am start, we had left our winches covered up the night before to be ready to go.

However due to the fine autumn weather the field was surrounded by mist, the start was delayed until 9-00am and flying then took place until 7-00pm with a short break for lunch.

The whole of round 1 was completed plus the speed and distance tasks in round 2,

All of us except Steve had minor mishaps including the dreaded 300 point penalties, Steve won or was very close to winning all his slots in the 5 tasks completed and was in 2nd place at the end of R1 and 3rd at the end of day 1.

The fastest speed run in R1 was 14.48 seconds by Daniele Amici ITA.

Most of the better pilots and many others flew out or were near to the 10 minutes in Duration; unfortunately I could only manage 7.30 and 85 landing.

Most of the distance slots in Round 1 were in the teens the best by Andreas Bohlem with 24 legs.

Round 2 Distance followed the pattern of Round 1with only a few in the twenties Daniele Amici was the best with 26 laps and again won the Speed task with a 14.35.

Steve Haley was close behind with 14.85.

So ended day one with beautiful autumn weather up to about 20 C with fairly light winds and very little cloud.

The round 1 scores can be viewed at f3be but so far the other round by round scores have not been posted however the final scores are on f3b.de

We were up bright and early again on Sunday morning, this time without the mist so the day started at 8-00am with Rounds 2 & 3 Duration back to back.

Both were flown in virtually no wind requiring minimum sink settings, most pilots did well in both rounds with high scores I even managed 9.32 with 100 points and 9.14 with 85 landing points.

My problem is not getting the launches high enough as with just a few more meters I would have easily done the 10 minutes and although I would not have won my Distance slots would have managed a few more laps and consequently gained some more points.

Round 3 distance was flown in much better air with many more scores in the twenties with highest being 29 by that man Amici again.

Steve Haley was still in third place only a few points behind, the final result, as in so many cases, would depend on Speed which was to be flown in reverse order starting with the pilots at the bottom, needless to say although I was not first to fly it was soon my turn.

The consistently good air found in round 3 Distance disappeared, the unlucky ones got poor air, (that is my excuse and I’m sticking to it)

The fastest time of the round and the whole competition was 14.27 by Jiri Baudis; and in fact in Round 3 he scored the only perfect round with 3000 points. He was flying his new design FOSA model having a more elliptical plan form and a higher aspect ratio, the model seemed better suited to the light winds, especially in Speed. 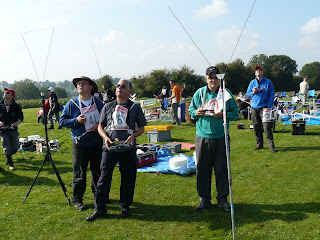 Although Steve Haley was still in 3rd place he was 4th last to fly due to a re-fly, we knew to win he would have do one of his special runs but should to be able hold onto 3rd place.

His first launch was not into good air but he registered 16.49 only to be told that although he had got a signal at Base A he was given a cut, that time would have kept him in 3rd place.

In the BMFA League if you get a signal you get the score because it is not the pilots fault if those signalling think they have made a mistake.

However it gave Steve another shot at winning if he got the good air which some of the other pilots had.

Unfortunately it was not to be as each of his three launches were nothing like as high as usual and to add insult to injury his last and final attempt resulted in a cut at Base B and a time 22.21, I cannot remember Steve having such a slow time even with a cut.

The result was that it dropped Steve down to 7th place.

The other places were Mark Passingham 39, (very creditable after the mid air,)

Bill Haley 41, Ken Woodhouse 43 (would have been slightly higher but for 2x300 point penalties,) I brought up the rear in 50th out of 55 entries, the order of the places were more or less to be expected based on those in the BMFA League.

There were also team places up for grabs based on three per team, in all there were 15 teams and our team of Haley S, Haley B and Woodhouse K finished in 9th place, an improvement on last year. 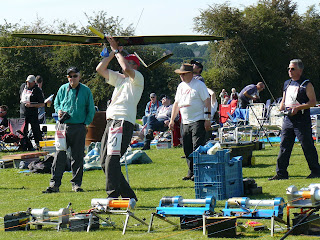 The Northern group were concerned about the finishing time of the competition as we were on a tight schedule to reach Rotterdam for the one and only ferry leaving for Hull each day, we estimated that to meet the 7-30pm last check-in time we would have to leave the field by 5-00pm at the latest, that was assuming no hold ups on the roads.

Fortunately the Comp finished at about 4-00pm and after very quickly loading my car we left about 4-30, meaning we were not able to stay for the presentations,

The organisation by Denis Duchene and all the others was superb; there was also a lot of help provided by families and friends.

It is a pity that we do not have the numbers or back up to host another F3B International contest.

The UK soaring community is very fragmented with all the various disciplines doing their own thing.

We should be trying to help each other to improve on the scores we obtain at International competitions and World Championships.