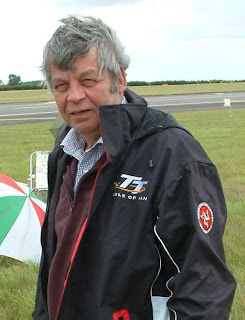 Oh, where do we begin? A two day league event held on Barkston Heath, which is a huge airfield, held so much promise.

Saturday was rough – wind speed was high (around 20mph) and the air low down was turbulent. Ok – this should not deter us experts, but it certainly slowed the competition down. Base B blew over once and had to be reset.

Rd 1 duration, My time of 4.30 something and a landing bonus won my first slot. Mikey decided to make a name for himself by demonstrating interesting launches. These were definitely the best demonstrations we have seen all year so far. Unfortunately he ran out of flyable models to carry on this demonstration. Early on, he was out of the comp, but gamely carried on helping, manning the course, etc for the weekend. 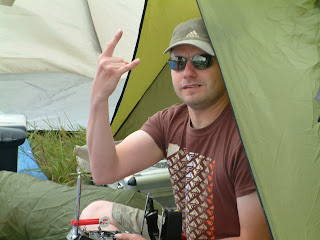 Neil Harrison had purchased a factory produced model – A Dingo. His investment appeared to be a success, he had not realised that a model could be so easy to fly and still be competitive, which indeed it was. 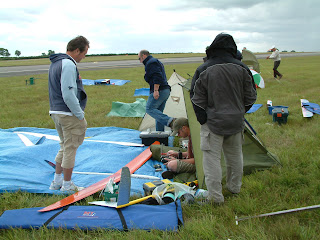 Steve Haley lost a slot! John Whittle took over a minute and a half out of him in Rd 1 duration. Savour that, Jon

I came 2nd in my first distance with 24 laps: - what a change in the air! I won my 2nd distance with 7 laps – things were proving to be a trifle variable.

Suffice it to say that the day’s competition ran through with its fair share of ups and downs, Paul Carrington landing a model on the runway, young Simon knocking the nose off his first model, me dumping the Estrella a bit hard on one landing and creasing the nose, generally we were struggling through the comp. We managed 2 full rounds on Saturday then adjourned for the evening.

The evening was without doubt the best F3B league social that we have had for many a year. We were able to get round a table, have a decent meal, a few beers and a lot of laughs. Mike Holtby joined us in the style that only he can – he arrived on a classic, beat up 1979 Trump 750 Bonneville, pitched a tent for the night and joined us for a meal. He also bought a round! 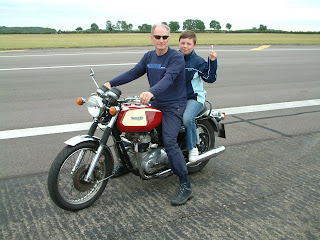 I also had a classic with me – In round 2, I flew an 11 year old Cobra which was Nick Wright’s 1999 WC model, so far, it is almost as new. Flying it, for me was like greeting an old friend. I flew a 19.36 speed, which is the best time I have recorded for around 2 years. I suppose the moral of this story is that cutting edge models are superb in the hands of cutting edge pilots.

Old gits like me are probably better off flying something we are comfortable with. The lift also doesn’t seem to realise the model is out-dated!

Day 2 – Sunday – First casualty was Neil Harrison. Having realised that I had forgotten to mention his tree landing in BBBL3, he decided to celebrate on Saturday Night. A surfeit of Stella, intermingled with white wine produced a banging hangover. Shouldn’t try to drink with the Mister’s Neil. Sunday morning he dare not trust himself to drive to the field, and when he was driven there dare not attempt to fly. Big hangover. Welcome to Bob’s World!.

Once again on Sunday, the wind was high. 1 round of duration was flown, after which the competition was called to a halt with only 5 of us left being willing or able to fly. This was something of an anti climax to the weekend, but it was still worth doing & a good weekend.

Take care out there!