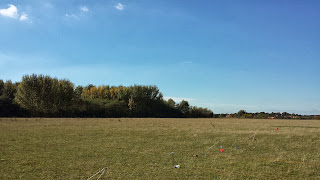 With the way the weather suddenly changed a couple of weeks ago, you could be forgiven for thinking that winter had arrived. However, the day at Wetlands on Sunday felt more like the BBQ weather of a couple of months ago! Perhaps it was the last warm day of the year, so it was a good day to fly some f3b. Winds were moderate, although launch heights generally didn't seem to be quite as high as I was expecting. There were a few good ones but generally it was pretty average I thought. Well that's my excuse anyway.

Conditions for thermal soaring were excellent, with most people flying out the 10 minutes fairly easily. Bob did struggle in one flight and showed his usual never say die attitude. Perhaps it might have been time to give up when the model was below the tree line though! Reports are not yet back from the search party.

Distance conditions and results were quite varied with two slots being won with 14 laps. The best score of the day was 24 laps by Mike Challinor. A few people suffered some fairly hefty deductions which would effect their final scores. Even Steve Haley lost a lap to yours truly! As the wind was blowing from the right of the course, nearly everyone decided to start up wind as the downwind option was over a leeward slope that offered mostly sink, especially earlier on before the ground had been fully warmed by the afternoon sun. While the directional choice was easy there was definitely some air to had and finding it and staying in it was not always easy.

Speed times were fairly decent as by the afternoon the flying conditions were generally quite good. In round one Simon Haley put in an excellent launch and flew a terrific course to smash his personal best time with a 16.41, flying his precious. Only dad Steve could compete by putting in a blistering 15.16 to take the 1000 points. Most the rest of times were in the high teens and low 20s. Mike Challinor cut which cost him a lot of time. Mike was going for it and that's what happens sometimes. 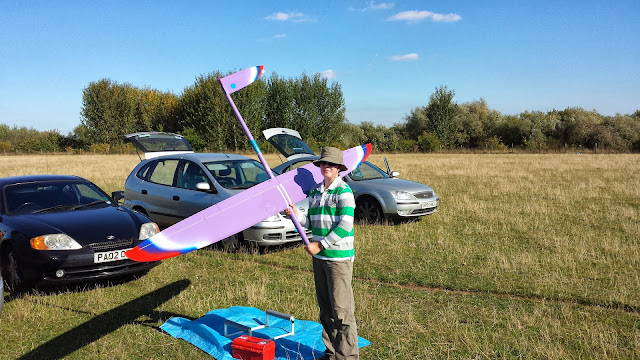 Round 2 of speed was also won by Steve with a 17.15 second run. Except for one, the rest of the times were again bunched between 19 and 21 seconds, with Simon Jackson and Dave Worral (electric) flying the next best times.

Results below. Congralations to Steve and well done to Simon for his new pb and for a mature performance to come in second. It was good to see f3b leg-end Dave Worral up in third place.