2011 - L8 F3B results - Retford.
1 Haley, Steve 6000
2 Challinor, Mike 5640.4
3 Whittle, John 5486.1
4 Haley, Simon 5465.8
5 Woodhouse, Ken 5213.1
Although I have left Alan and Dick off the official ranking for L8,
I think we were all very impressed with the F5B models and grateful for their help on the bases during the day. The idea of combining the two events (F3B & F5B) would certainly add more gravitas to both FAI discipline's, advance electric F3B and hopefully make for more efficient and enjoyable competitions.
Mike flew steady as always, John W flew the nuts of his vintage Ellipse 2 and placed a credible 3rd and Simon flew his best F3B contest to date placing 4th. It was good to have father back in team Haley following illness and Bob for keeping us entertained as always (that bloody tree again Bob)...!
It wasn't one of Kens best comps which was understandable given his slipped disc issues and Jonathan
continued to improve and will be a force in the league once he gains some consistency which will come soon with experience and positive attitude.
Overall 2011 F3B Results.
1 Steve Haley 4,000.00 100%
2 Mike Challinor 3,806.90 95.2%
3 Ken Woodhouse 3,720.36 93.0%
4 Simon Haley (Junior) 3,634.31 90.9%
5 John Whittle 3,542.91 88.6%
Well done to the top three (Steve, Mike, Ken) and to Simon for placing 4th which at 12 years old must be the highest junior placing we have had in the league's history.
A big thank you to Clive once again, for running the league and for maintaining and transporting all the equipment to and from the comps.
One again, this year, we have seen the number of competitors reduce and although most F3X disciplines are experiencing the same, we do not promote / maximise our sports' exposure nearly enough and we are all guilty of not doing as much publicising as necessary.
I am convinced that electric F3B is one option that we should promote vigorously and credit again must go to Clive for flying his electric Crossfire this year, to develop the rules, and promote the advantages of electric launch. Given Clive's efforts I think we are all hopeful that we may gain some new pilots next year using this format.
UK pilots have competed in two F3B Euro tour events this year and apart from being very enjoyable, we continue to learn and improve our competitiveness which inevitably filters back into our league. Mike, Simon, and especially Ken, have all improved immensely this year as a result of competing at a higher European level and I would urge everyone to make the effort, finances permitting, to have a go at least one of F3B Euro tour events.
Its a very different experience to the normal UK league event and very rewarding. 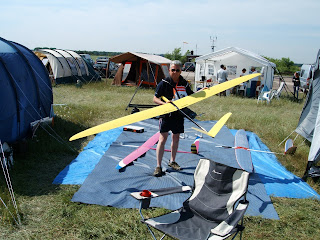